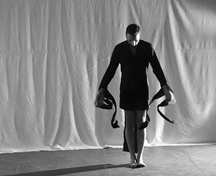 Born in 1988 in Teheran and trained in literature, teaching and communication, Sina Saberi came to performing arts in 2012. First as a performer in various Iranian theatrical productions, then shortly afterwards in physical theatre and finally in movement. In 2014, he created his first solo work, On Two Feet, which looks at the untrained body which has the urgency to move. This work became the starting point for a research that raises many questions about the minimum 40-year gap of dance in Iran.

These questions have taken the form of a practice that explores dance and movement in a context that does not welcome these notions. In 2016, Sina Saberi created Prelude, a short dance piece that aims to embody the invisible progression of Persian dance. And in 2017, he directed Damnoosh, a critique of his own position as a dance artist exoticized from Iran, where dance is supposedly "forbidden".

Since 2017, the artist has been in the process of creating the third part of this trilogy, basis for being or as called in Farsi Narges.

Sina Saberi works in collaboration with several artists and authors from around the world, merging practices across different disciplines and communities. He co-founded MaHa Dance Projects in 2014, that is the founder of the body movement initiative in Iran. In 2017, he created Kahkeshān, an indeterminate space for dance creation & movement research from Tehran and beyond.