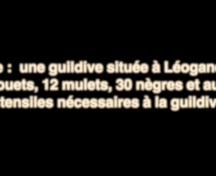 With the support of the Médiathèque Michel Crépeau, the Musée du Nouveau Monde, the Maritime Museum, the Departmental and Municipal Archives, Radio RCF, Coolisses and the La Rochelle Tourist Office.

This event is part of Un Été particulier of the City of Paris.

For more than three centuries, the slave trade linked France, Africa and the Caribbean. What is left of this memory that some people have forgotten?

Inhabitants of Paris, in small groups of five, sometimes ten, are invited to travel through time, through the sounds of the 18th century, the time of the sugar islands, the time of the pirates, the time of the most prosperous French colony. Reaching out to the passers-by through sound interventions and performances mixing the music of the time, songs, poems, registers, ship captains’ diaries, sales extracts.

This installation performance, or simply this soundtrack, will be followed by a time of discussion with the artists.

A creation by Guy Régis Jr and Hélène Lacroix produced by NOUS Théâtre.

Guy Régis Jr (Haiti) is a former resident of the Cité internationale des arts and he is currently
in residence at the Maison des écritures of La Rochelle.