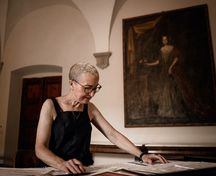 The pianist, composer, bandleader and University of California, Berkeley, professor Myra Melford — whom the New Yorker called “a stalwart of the new-jazz movement” — has spent the last three decades making original music that is equally challenging and engaging. She’s explored an array of formats, among them ruminative solo-piano recitals, deeply interactive combos and ambitious multidisciplinary programs, probing the space shared between dynamic small-group jazz and contemporary chamber music.

Since debuting on record as a bandleader in 1990, she’s built a discography of more than 25 albums as a leader or co-leader, and has been awarded numerous DownBeat poll placings, a 2000 Fulbright Scholarship, a 2012 Alpert Award in the Arts for Music and, between 2013 - 2016, a Guggenheim Fellowship, the Doris Duke Performing Artist Award and the Doris Duke Residency to Build Demand for the Arts.

The Other Side of Air, the most recent release by her quintet Snowy Egret, was named one of the best jazz recordings of 2018 by the New York Times and one of NPR Music’s 50 Best Albums of 2018. “This is music with an endless capacity for elasticity and surprise,” NPR wrote, “along with an affirming spirit of coherence.”