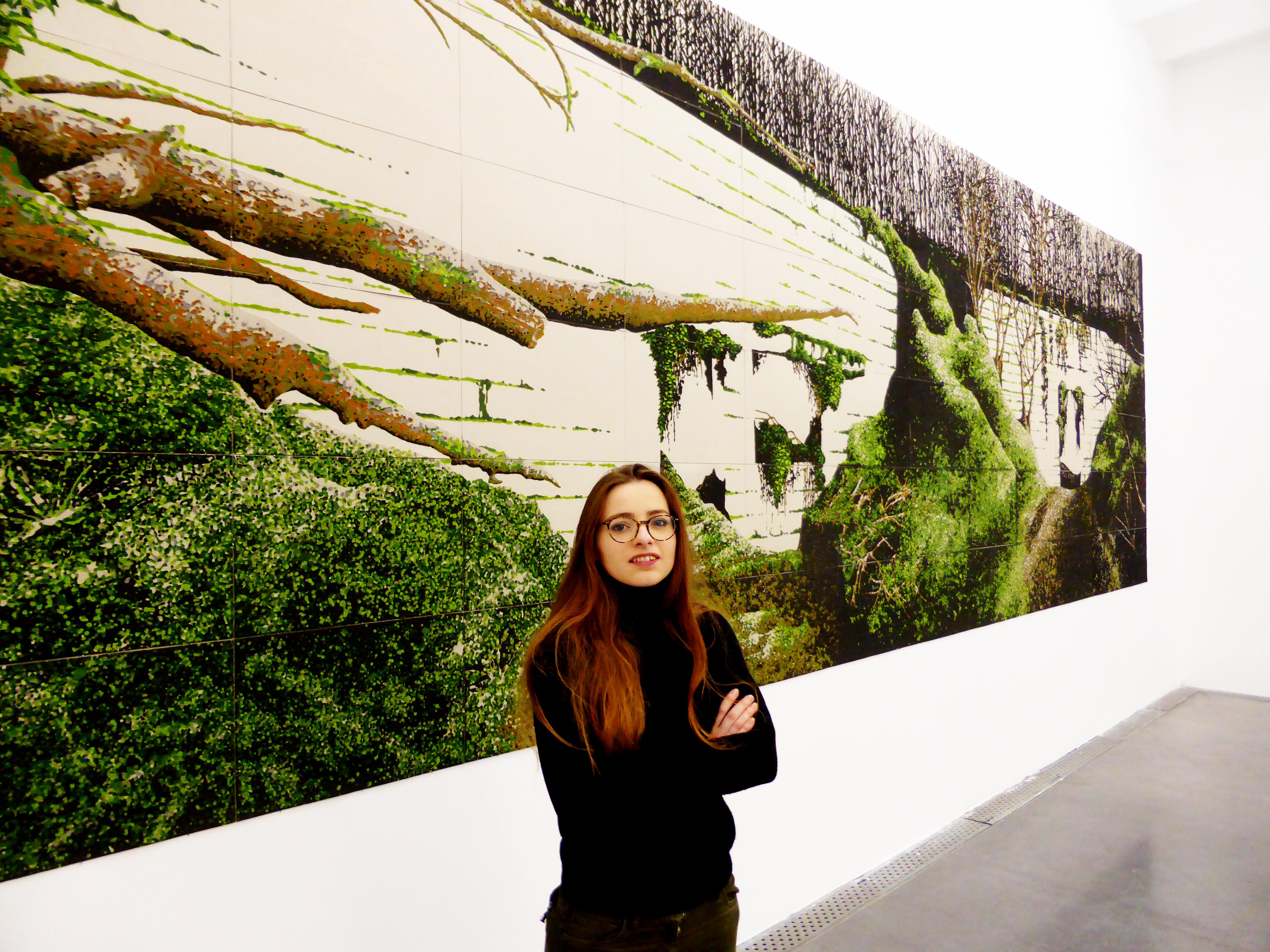 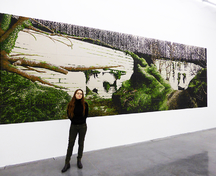 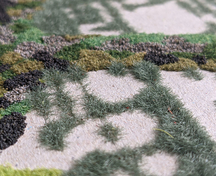 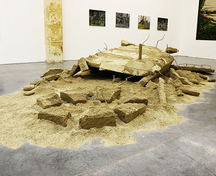 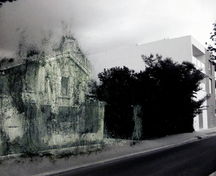 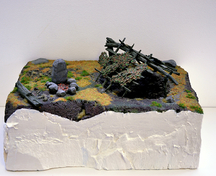 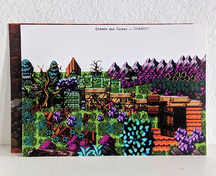 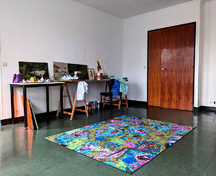 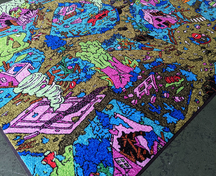 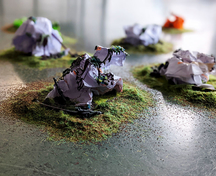 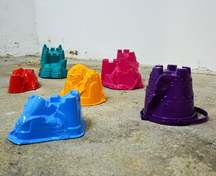 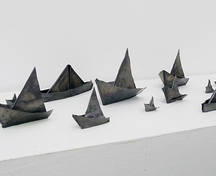 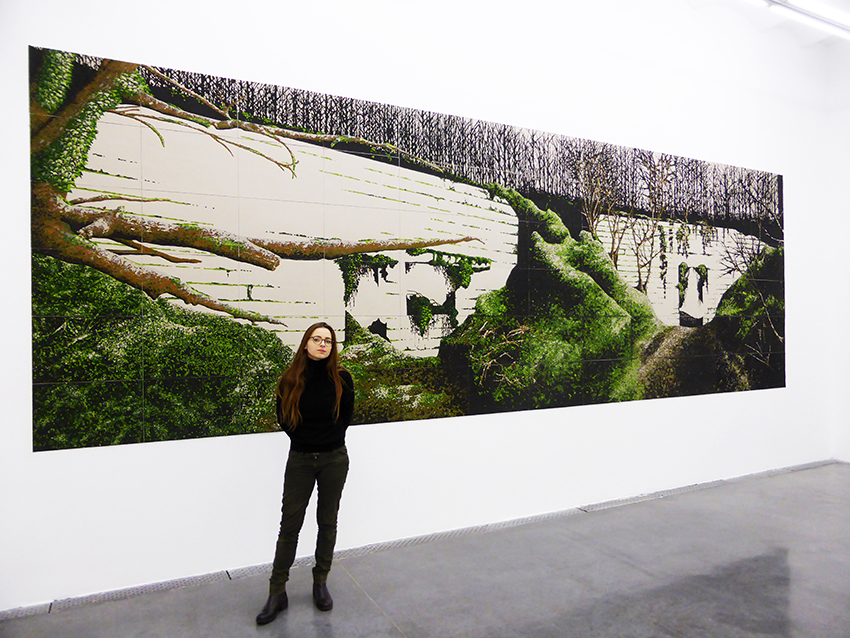 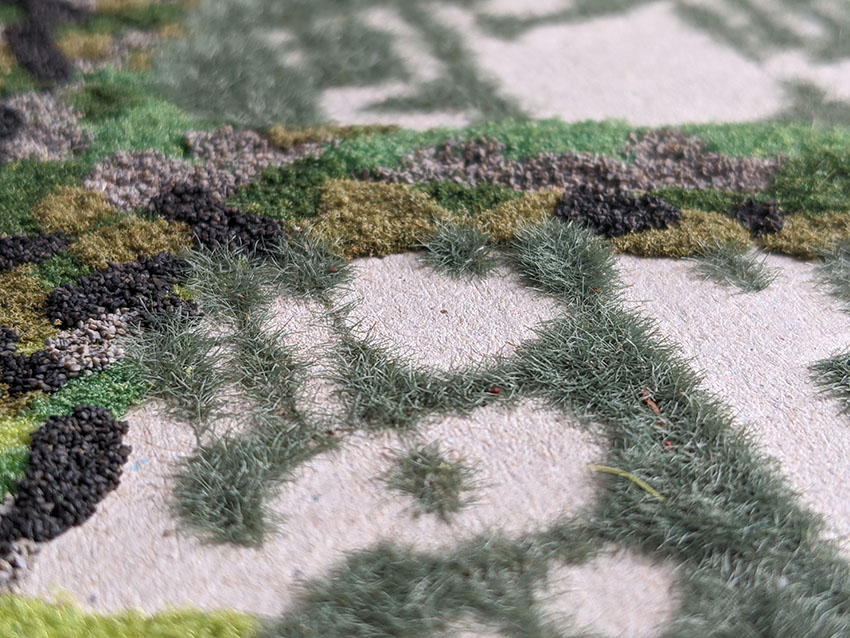 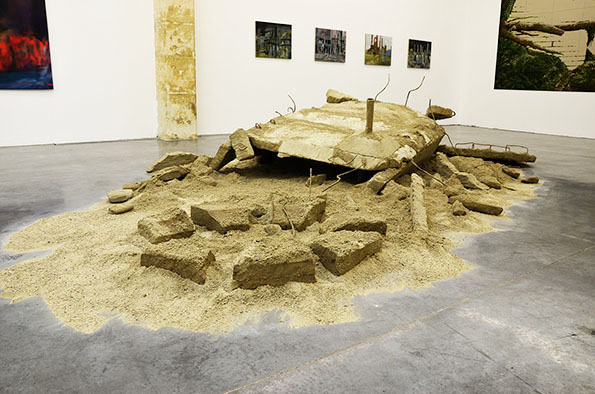 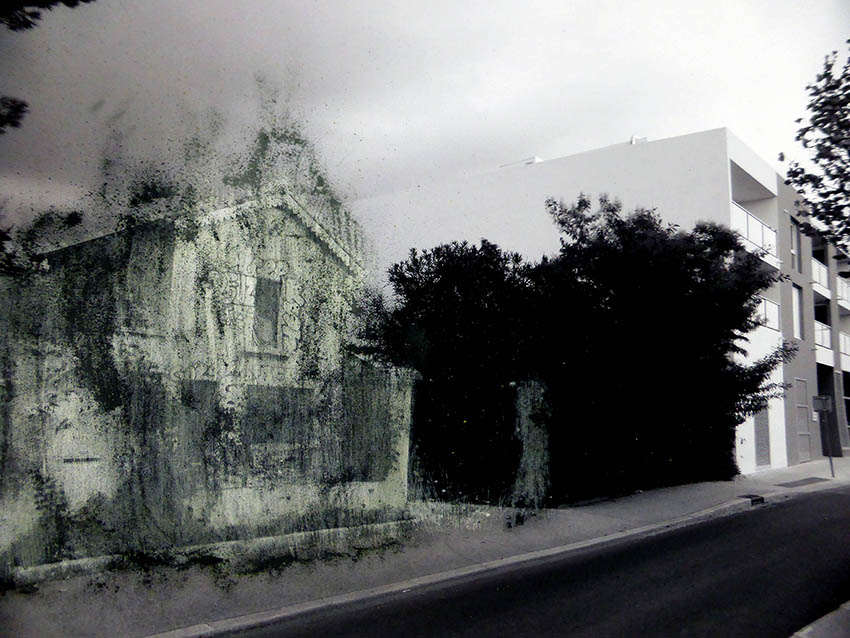 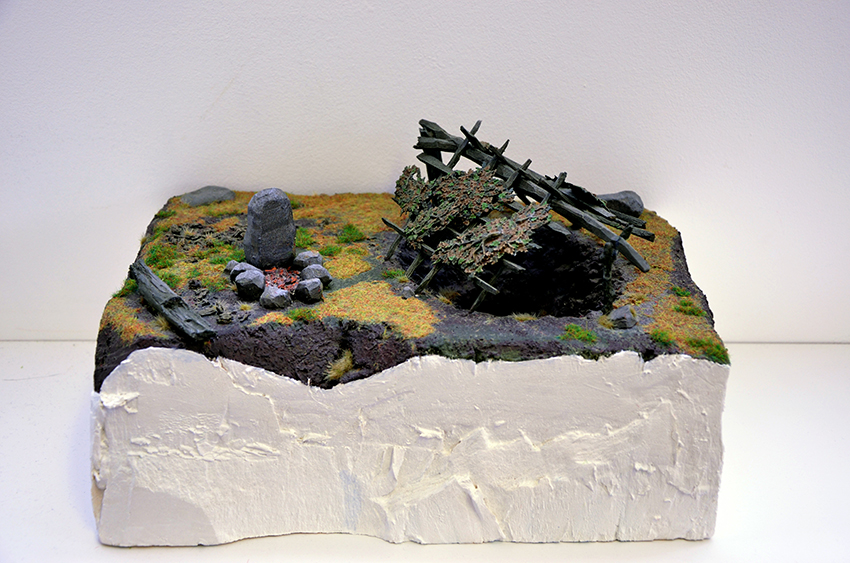 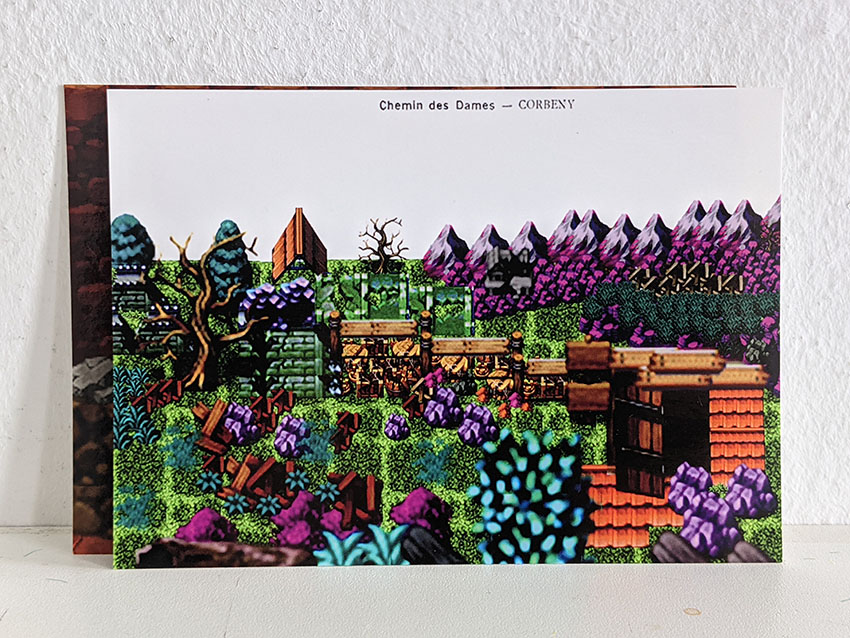 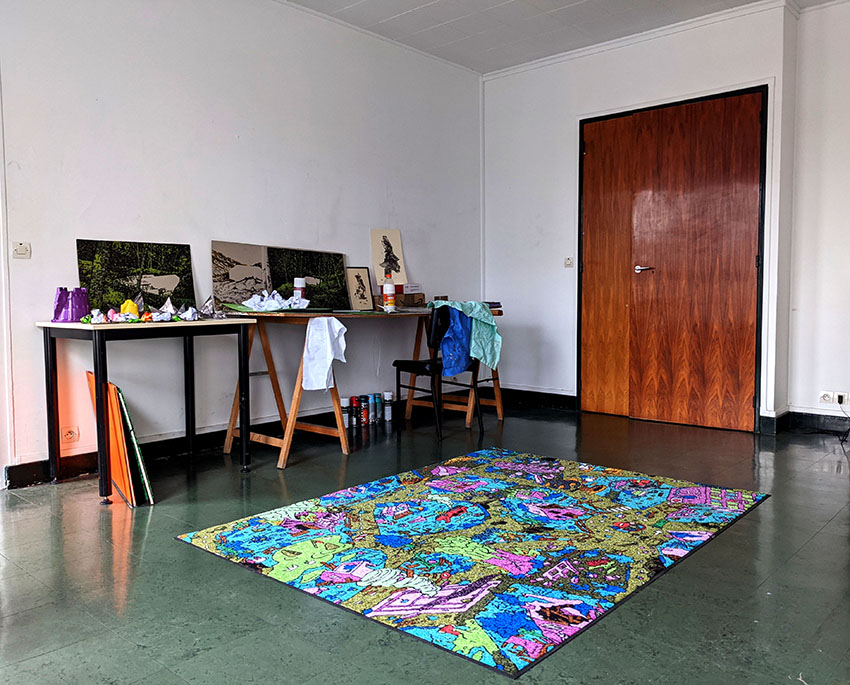 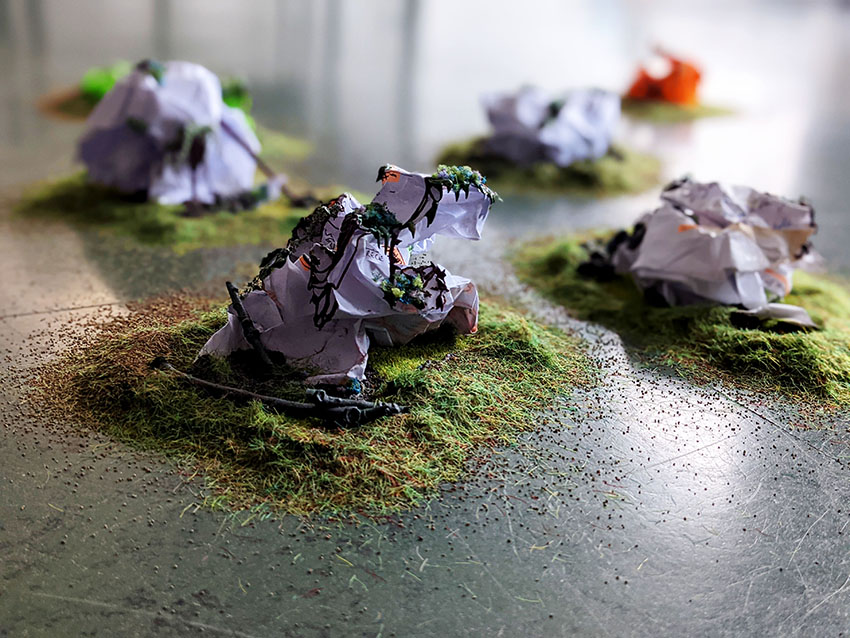 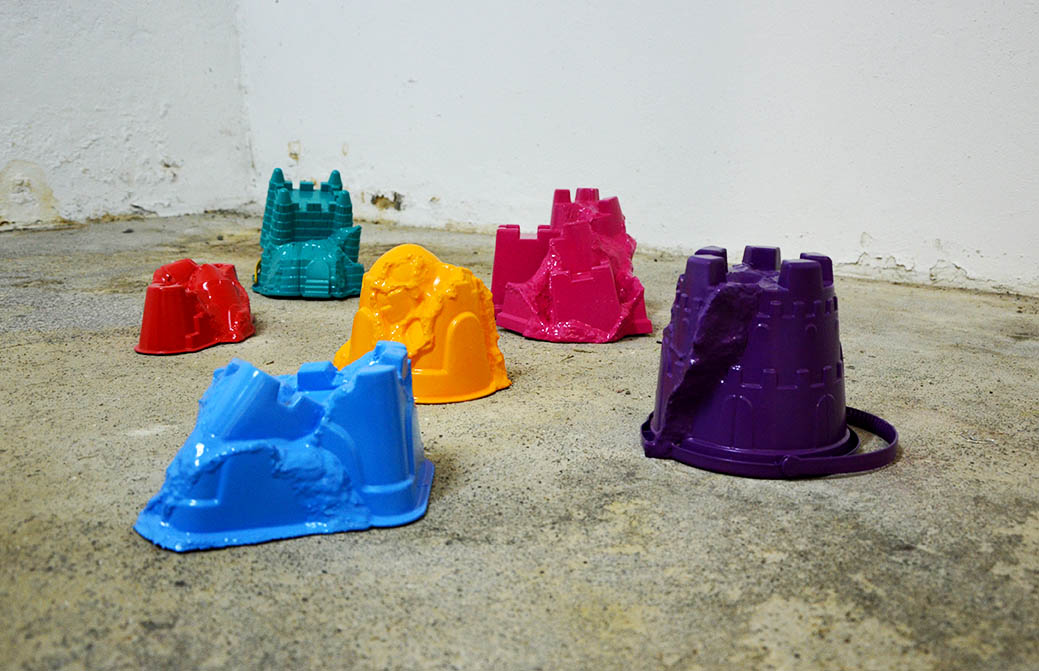 On the occasion of the series Work in progress (everyday) broadcast in January 2021, Marie Havel looks back on her work and the project she worked on during her residency at the Cité internationale des arts. Reading to accompany with the visuals opposite.

Through various techniques and often between modeling and drawing, my work questions ruin. From its traces ingested by landscape and collective history; to the most intimate domestic environment and the rituals of play; I try to capture the moment when ruin occurs, to envisage the reactivation of ruins and the possible changes in the identity of places or landscapes; to reveal the travesty of places through memory, through individualities, through the notion perhaps of "used landscapes". I seek to point out the individual history in a more collective history and especially to consider the ruin as a possible mode of construction in its own right with its own mechanisms, as a possible evolution, an increase rather than a degradation. This work is thus about tensions, power relations, points of balance and cycles of construction/(con)struction, discoveries/overlaps; between nature and Man, adult and child, child and nature.

This approach has its source in known places and through personal experiences, my playgrounds being mainly located in the Aisne near the Chemin des Dames or on the Opal Coast strewn with remains of the Atlantic Wall. Landscapes forged, shaped, by a distant but omnipresent History of fall, ruin and devastation, which are also the support, the basis of many childhoods, games and reappropriations, constructions / reconstructions intimate and collective.

Thus, the first part of the work evokes the constituent ruin of the landscape, of architecture, of a great external common History sometimes distant; when the second suggests landscapes qualified as domestic, an intimate and interior environment, seemingly more naive and familiar, marked by winks, anecdotes and objects as singular as they are representative of a generation. If this global research, through the diversity of mediums and subjects, can then easily be divided into two quite distinct parts; it nevertheless strives by its articulation to go through the ruin and the way we see it; starting from a collective history towards a common imaginary, seeking to point out the origins of the ruin, its resurgences, its roots and their possible destinations.

It is this articulation, this connection between these two axes that I wished to question and work on in the framework of the residency of the "Daniel & Nina Carasso Foundation and Cité internationale des arts" program, to make the approach more legible by immersing myself more in the second part of the work, more recent, which echoes perfectly with a residency time and in particular in the current period, going from the outside to the inside. I entitled this project Die and Retry, a term derived from video games, designating a practice that consists first of losing/deathing in order to know the mechanisms of the game in order to then be able to come back and start again, this time successfully. A chance that video games allow, games more generally, but also a time of residence like this one; to isolate oneself for a time to better grasp the object of research, of preoccupations before coming back and starting again, after this suspended but far from vain time, like a child's hut that encloses as much as it suggests escape and evasion.

Living and working in Montpellier, Marie Havel was born in 1990 in Soissons in the Aisne. After a BTS in visual communication, she graduated in 2016 from the Ecole Supérieure des Beaux-Arts de Montpellier (MO.CO ESBA).
Recipient of the Young Creation Prize Drawing Room 2016 in Montpellier and then of the First Prize DDESSIN in Paris in 2017, she realizes in summer 2018 a duo exhibition with the visual artist Clément Philippe at La Mouche Art Contemporain Béziers.
Her work was notably presented during the 2019 edition of Bienvenue Art Fair at the Cité internationale des arts with the Jean-Louis Ramand Gallery.
Recipient of the FRAC Occitanie Montpellier 2019 Post-Production scheme, she recently exhibited her work during the collective exhibition Le Bal des Survivances.
Since 2015, she also collaborates regularly with the promoter and the GGL Helenis Foundation on various artistic projects.
"Marie Havel's work is rooted in a reflection on ruin, a state of fall assimilated to things as well as to the individual.
It is based on a subtle combination of construction and destruction. This precarious balance is apprehended at the dawn of childhood, in experimental and playful dimensions. In this sense, his works propose a double vision, that of curiosity, of play, of an age when we adapt to the environment full of history that surrounds us, and that of a more distant approach, focusing on what builds our past. (...) Her work is thus about introspection and remembrance, she will draw from the rubble of her memory to shed light on the images and experiences she has lived through. The state of ruin is not only revealed (...) but also suspended. There is a state of latent reprieve in her drawings, of which the Jumanji series is particularly representative. (...)
In contrast to structures that deteriorate over time, Marie Havel builds originally altered constructions, she erects the ruin. What is brought to light is not so much the fall as the vain act. The works are part of a form of cynicism, where instability and destruction are the essence of the structure. If Marie Havel excels in the technique of drawing, her work presents a declination of mediums, always focusing her attention on the collapse in an ambiguous way (...)
The artist promotes chaos, failure, and adversity. (...) There is indeed in his work a need to reveal, to show what one does not see or would not like to see anymore. (...) Marie Havel's works are thus imbued with memories where her story takes its place in history. Ingenious childhood takes the place of the reality of a deteriorated world, in tension. Yet it is a sublimation of memory. Through the reconstruction of games, perilous situations or structures, the artist introduces a poetry of ruin."
Excerpts from a text by Gwendoline Corthier-Hardoin, art theory researcher and curator, March 2020.

"This program was a unique opportunity to gain perspective, to reappropriate work as well as time, to have unexpected encounters and to preserve, thus allowing me to analyze and strengthen my artistic approach. These six months are already the marker of a considerable evolution in my young career, a new stage at a time when nothing suggested such an opportunity."