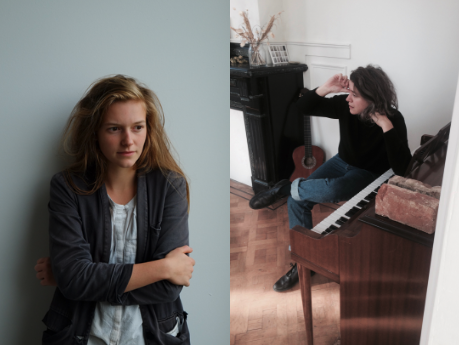 Line Pillet has a background in performing arts and writing. She has been working on several projects within fine arts collaborating with several institutions in Belgium. Currently she is writing on her scenario for which she received a grant and subsidy from the VAF (Flanders Audiovisual Fund).
Diane de Moor has a background in music and sound design. She is currently working on different music projects in which she examines the effects of new created sounds, repetitive music, loops and the musicality of this within the production of electronic music. She has been working with the Royal Academy of Fine Arts Antwerp, deSingel and has a current atelier residency at the Veerman (Antwerp).
During their residency, they wish to subject their expertise to a thorough analysis, in order to link the narrative aspect of a story with a sound and musical aspect, through a new form and a new medium. This form will establish itself as a new way of producing music analogically with text and image for an infinitely performative result.

The selected sounds will be mechanically manipulated, looped, then re-recorded and reused for narration. The text will be narrated, manipulated and recorded in a loop through a sampler.

The sound result of the performances will also be recorded and reworked to create new sound textures. Among these textures is the veil, which is exactly the type of effect the duo wishes to highlight in the performance.