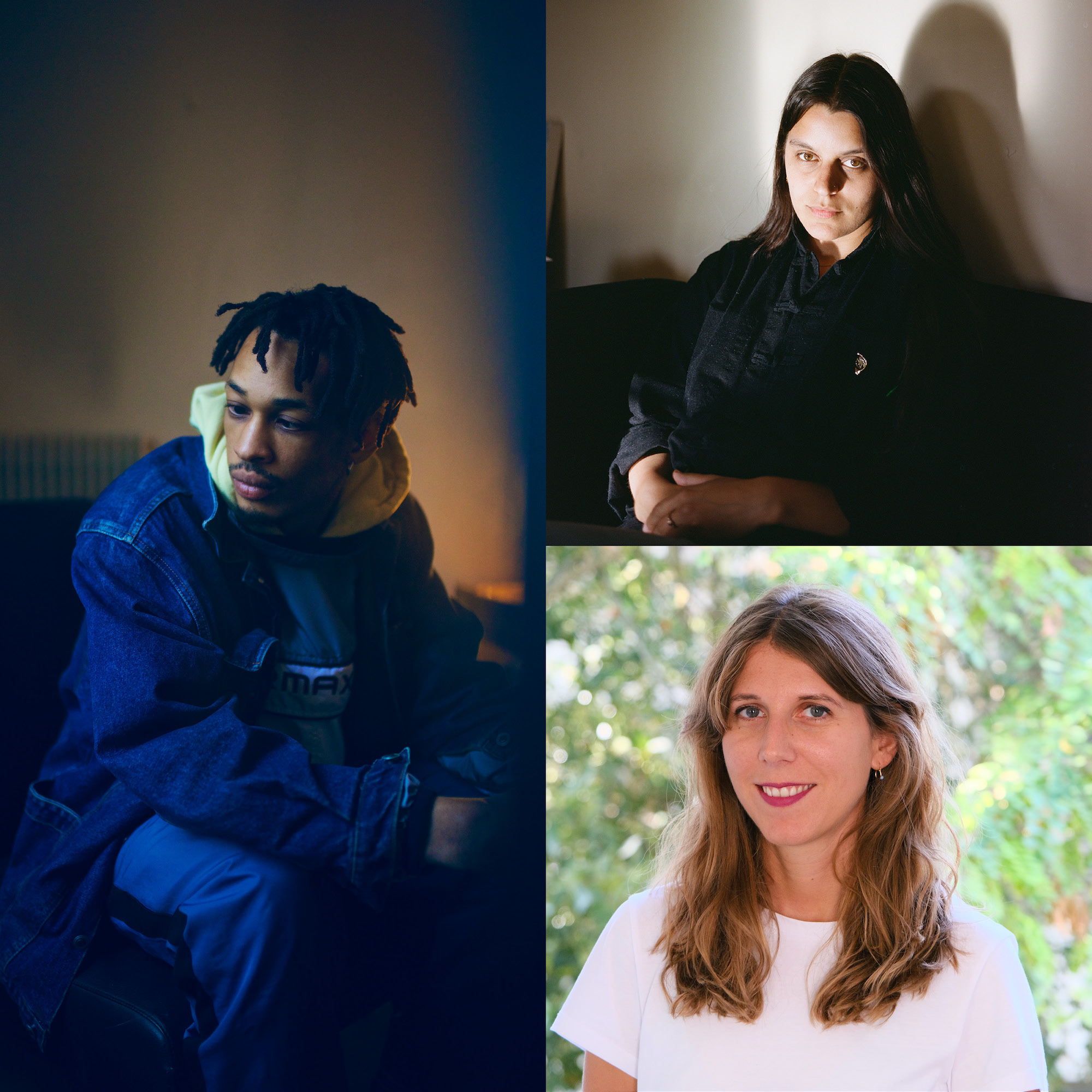 Échauffements pour air (Warmers for air)
To begin, Nicolas tells us to close our eyes, to follow his indications and the rhythm of the music. It is difficult to apprehend the space with closed eyes. In this absence of vision there is something liberating, the gestures are like memorial traces, ghosts that cross all geographical and temporal coordinates. They constantly manifest themselves in the same form. In the image of our emotions which, as Warburg would say, are always embodied by the same paths.
Échauffements pour air (Warmers for air) is a collaboration between Elena Cardin, Nicolas Faubert, Mona Varichon and Jacob Eisenmann. It is a preparatory session for an upcoming event at the Cité internationale des arts. A reflection on what escapes sight, on what hesitates between the visible and the invisible, appearance and disappearance.
– Elena Cardin
Elena Cardin

Her curatorial research focuses on experimental, narrative and political forms of exhibition, related to issues of gender, intimacy and decoration.
Elena Cardin worked as assistant to the artistic director of the 57th Venice Biennale Viva arte viva and was in charge of the off-wall programming of the Contemporary Art Centre in the Parc Saint-Léger, between 2018 and 2019. In 2019, she founded the curatorial platform Palomar projects, inviting artists to explore the poetic, aesthetic and political potential of atypical places in Paris.

She currently works at the Campoli Presti gallery, as a guest curator within the Orange Rouge association and writes regularly for the Revue 02.

She has participated in the organisation of exhibitions in several institutions, including the Centre Pompidou, the Ricard Corporate Foundation, GAMeC (Bergamo, Italy), the Giorgio Cini Foundation (Venice). She is the winner of the Lorenzo Bonaldi per l'Arte - Entreprize curatorial prize (2015) with the exhibition project Deus sive Natura, which she is producing at the GAMeC in Bergamo, in partnership with the Hartung-Bergman Foundation.

Mona Varichon is an artist and translator based in Paris.

She regularly organizes screenings of films by other artists, notably for the galleries Cordova (Barcelona, Spain), Yale Union (Portland, OR), Leroy's (Los Angeles, CA), Ampersand (Lisbon, Portugal) and Potts (Alhambra, CA). She is currently working on the French translation of the memoirs of American filmmakers George and Mike Kuchar.

Nicolas Faubert was born in 1991 in Libreville, Gabon, with a visual disability of more than 80%. In spite of these difficulties, he follows his first years of schooling normally and his family introduces him to dance and music.

Nicolas Faubert, whose stage name is Kryzastyle, thus launched himself body and soul into dance in 2009. He spends more and more time between Normandy and Paris, where he is introduced to the New Jack Swing and the New School. He explores popping, opens up to hip-hop, house and locking. In the break rooms, he detonates while dancing standing up; his eyes are still too fragile to hold upside down positions on the floor.

Between 2012 and 2014, he is spotted during the auditions for the Robin Hood musical, which allows him to get a place at the International Academy of Dance in Paris: he trains there for two years in dance, singing and acting. He then joined the Lax Studio and the association 93 Arts communique / Cie Elolonguè where he met Lydia Laouxhi, for whom he still works today as an assistant coach for the HIKMART association.

In 2018, Nicolas is chosen by video artist Laure Prouvost for her project for the French Pavilion at the Venice Biennale of Art. After being one of the main actors in her short film Deep see blue surrounding you / Vois ce bleu profond te fondre, he performs in the Pavilion during the whole 2019 Biennale.

Today, Nicolas Faubert is project director for the association Heart Street. Nicolas Faubert defines himself more as a "character" than a dancer. Through his crossbreeding, Nicolas Faubert wants to bring people together; through his disability, he wants to raise awareness. The almost total reduction of his sense of sight has enabled him to strengthen his four other senses and to develop a unique sensitivity to music.

Jacob Eisenmann is an artist and director born in Oakland in 1991. He lives and works in Paris and Los Angeles. He has just published Haggadah 2020 with Apogee Graphics, the publishing house of artists Laura Owens and Asha Schechter.