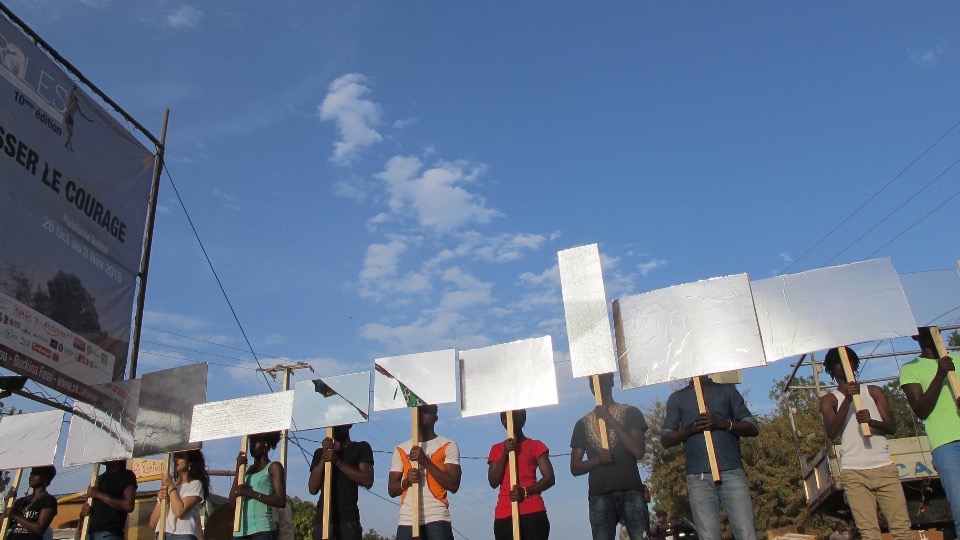 For over fifteen years, École des Hautes Etudes en Sciences Sociales in conjunction with the Imaf laboratory has been offering a seminar entitled The Arts in Africa and its Diasporas.

This seminar questions the driving role that artistic forms, practices and knowledge play in the elaboration of political structures, movements and ideologies, in their circulation, in the imaginaries they generate on the continent and in its diasporas. It deals with visual and performative arts, literature, music, cinema.

The approach is critical and transdisciplinary.

The teams that co-direct the seminar and the subjects and ideas explored have varied greatly over the years. Since the fall of 2017, it has been held at the Cité internationale des arts rather than at the School itself. This is in an effort to open up to a wider audience.

The current cycle of the seminar takes as its starting point the proposition that the African world today, that is to say the continent and its diasporas, is a locus of particularly rich, or, better yet, radical, experimentation and reflection on the possibilities of performance as a political project. Politics, here, references not partisan positions but to the expression of ethical points of view. By performance, we mean performance art, of course, but also, and more broadly, the art of taking on/taking over public space for the purpose of (a) taking a position.

In this session, the seminar organizers propose to reflect on notions of "performing the political". They will offer three proposals, three takes, three approaches, to be questioned together.

The complete program of this get-together just below:

Sarah Fila-Bakabadio will present a forthcoming work on whiteness as seen by blackness. It questions the production of black views on whiteness. The objective is not to overturn old patterns or to found a new asymmetrical duality but to return to the primary space where political, social and visual dynamics are played out: the body. It is also to show that the notions and tools initiated by Black Studies and Critical Race Theories allow us today to analyze the role of corporeality in the joint construction of whiteness and blackness.

Sarah Fila-Bakabadio is a lecturer in American and African-American history at CY Paris University and a researcher at the AGORA laboratory. She works on the cultural, intellectual and visual circulations of African-American and French descendants in the Black Atlantic (19th century-present). Her research interests include African-American nationalisms, the black body, black beauty and Black Studies. She is the author of Africa on my Mind: Social History of Afrocentrism in the United States, (Paris, Les Indes Savantes, 2016).

Christine Douxami will address Afro-American Indian performances in Brazil and more particularly those related to an event entitled Nego Fugido, located in the Recôncavo in Bahia, on the very political theme of the abolition of slavery in 1888.

Christine Douxami is a researcher at the Institut des Mondes africains and a lecturer HDR En Arts de la Scène at the Université de Franche-Comté, soon to be assigned to the IRD in Brazil. She has been studying, since 1996, the forms of struggles and identity assertions through artistic means and more specifically performative forms both in Brazil, on the African continent and in the different diasporas.  She is the co-director of the feature film Fesman 2010, from North to South, from East to West and the author of the book Black Theater in Brazil, an affirmation of Afro-Brazilian identity.

Dominique Malaquais and Julie Peghini will discuss a research project on performance and politics that has brought them together for some two and a half years.

In October 2018, the tenth edition of Récréâtrales, the flagship festival of the performing arts in Africa, a pan-African space for writing, creation, research and theatrical dissemination immersed in a neighborhood of Ouagadougou, has been held. For this edition, Julie Peghini and Dominique Malaquais are invited to propose a performative program. Their medium-length film, What we are made of, comes back on six performances that take place on this occasion.

The film is linked to a research-creation project, Yif Menga: performance in dialogue. Its objectives are to build a bridge between performance as a political act and research in the human and social sciences; to create a space for exchange where artists and researchers meet to produce together, beyond the mere amphitheaters or theaters; to think performance from Africa from Africa, guided in this by artists for whom performance and politics are raw material for reflection.

Julie Peghini is an anthropologist and filmmaker, lecturer at the University of Paris 8, member of the CEMTI. She is also an associate researcher at ITEM/CNRS and works in the Congo team, in particular on the manuscripts of Sony Labou Tansi. Insurrection du verber aimer (2019, 80 minutes), around the contemporary heritage of Sony Labou Tansi's work, is her first feature-length documentary film.