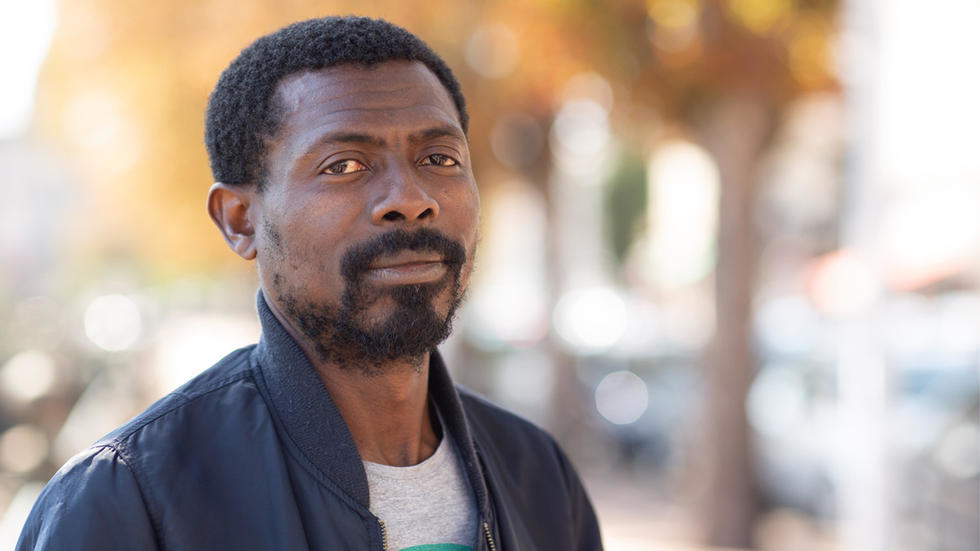 Born in Cameroon, Denis Sufo Tagne – aka Sufo Sufo – is an author, actor and director.
His plays are performed, read, or selected by reading committees such as, among others, the Bureau des lecteurs de la Comédie-Française, the E.A.T, the Théâtre de la Tête Noire, the Panta-Théâtre or the CDN de Normandie-Rouen. He has benefited from different resideny progam such as Visa for creation, the SCAC of the French Embassy in Cameroon, the CNL-Centre National du Livre. He also benefited in 2017 from the support of the collective À mots découverts.
He has been welcomed in several places of residence: Maison des Auteurs in Limoges, Maison Maria-Casarès, 10 out of 10 in Poland and Senegal, Maison de la Culture du Mont Royal in Montreal, La Chartreuse-Centre National des Ecritures du Spectacle.
His play Debout un pied received the SACD award for French-language dramaturgy 2017 and the Prix des Écrivains Associés du Théâtre 2018. The play was read at the Festival d'Avignon 2019, and is published by Éditions Espaces 34. Sufo Sufo is also published by Lansman, ETGSO, DramEdition, and Awoudy.
"...One day he sends us a text, Croisement sur l'échelle de Richter, and there something very strong appears, something that we find in Debout Un pied, and that is one of the reasons for our choice. There is in this current wave of his writing a research on how to say, how to tell, how to let the true speak, how to let the false speak".
Nadine Chausse, Head of the House of Authors of Limoges (Zébrures du printemps), at the Festival d'Avignon in 2019.
His residency project at the Cité internationale des arts revolves around the writing of a text about a group of people who have made a revolutionary invention. The writing is inspired, in part, by the rather peculiar life of a collective of Parisian artists.

"Being at the Cité internationale des arts to pursue the writing of a text during a six-month residency, the project has developed, on several levels. Artistically, the writing continued, in the particular conditions that the Cité is going through in these times, but the city of Paris, with its passers-by, people in the street, in difficult situations or inner revolutions nourishing a questioning on the human condition in our time, and for the writing of a text with characters in search of renewal. If the first reading will soon take place at the Cité internationale des arts, the perspectives of creation have been considered, notably with the mentoring sessions, which have also allowed reflections on artists, artistic practice, and the cultural industries of our time."