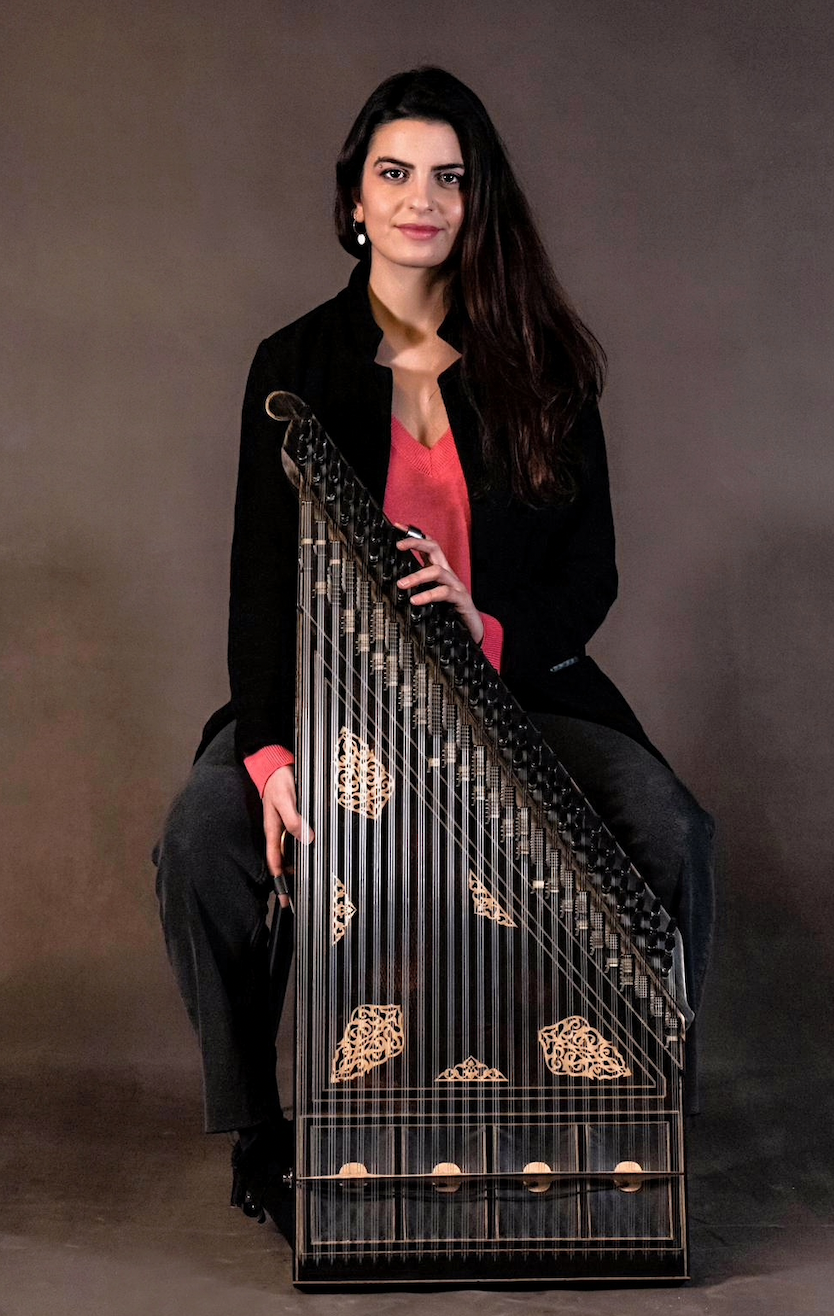 Born into a music-loving family from Palestine, raised between Jerusalem and Ramallah, Christine Zayed was introduced from a very young age to classical and contemporary Arabic music, as well as to traditional Palestinian music.

With her two brothers, composers and multi-instrumentalists, she began to learn the oud and singing. At the age of 9, she joined the Edward Said National Conservatory of Music in Ramallah to learn the violin, classical music theory and its history. But the discovery of the qanoun and its vast possibilities leaves her fascinated. She decided to deepen her knowledge of Arabic music and other traditional repertoires in which this instrument has always played a major role, in addition to taking lessons in Maqam, Arabic rhythms, Arabic music history, and singing. Already, she performs with various ensembles formed at the conservatory.

Thanks to her music, Christine Zayed began to travel within various musical projects. It starts with the Amman for all orchestra, then she takes part in Simon Shaheen's Arabic Music Retreat at the age of 16. She subsequently received invitations to perform in various festivals around the world as a singer and qanoun player in France, the United States, Qatar, Norway, Serbia, Jordan, Russia and Italy.

At the age of 21, Christine Zayed decided to leave Palestine for France, to pursue her studies with a Master's degree in musicology (music and sound creation) and jazz studies at the conservatory; while studying the Greek, Turkish, Arab-Andalusian, Algerian and Tunisian repertoires at the Edgar Varèse Conservatory in Gennevilliers, where she now works as a professor. There, she undertakes numerous collaborations with French and foreign artists, and initiates original projects such as with the Iranian singer Aida Nosrat, the Lebanese violinist Layale Chaker or the French interpreter of the Turkish and Kurdish repertoire Eléonore Fourniau.

At the end of 2018, Christine Zayed begins to perform as a soloist, interpreting the classical Arabic repertoire as well as her own pieces with voice and qanoun, in different places such as the Arab World Institute, the Péniche Anako and the Petit Bain in Paris, as well as abroad. This is the culmination of his artistic journey and the beginning of a very special experience. She is currently in the process of writing her first solo album, which will also feature a number of guest artists.

Christine Zayed offers us this original composition as part of Work In Progress (Everyday).

"It was a very powerful experience that opened the door to a new artistic life and gave me the opportunity, the space and the time to focus on what is important, A Million Thanks."