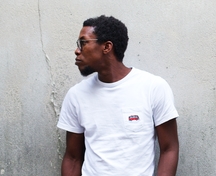 Cédrick Calvados's photographic work took a real turn in 2013, through a project entitled La Guadeloupe, mon visage, launched on social networks. He chose to approach subjects through close-up portraits, which are for him a way to overcome the rejection of oneself, one's own image and the fear of the other's judgment. That same year, he made a documentary entitled Ombres, in which he highlighted the reality of homeless men's drug addicts.

Afterwards, he participated in several exhibitions, developped his vision and his photographic writing, which are imbued with human poetry and nourished by his biases. Sensitive to the frame and the movements within it, he is constantly looking for the ephemeral harmonies that the "moment" brings to the stage.

I believe that people are connected by invisible energy flows and I like to think that with photography, we can see them. That's why I try to compose my images in such a way as to create a link between people.

Today, some describe him as a portrait painter, but he sees himself above all as a committed essayist and participant of his time. Since 2018, his trips to Cameroon and Haiti have led him to question the issue of resilience. At the same time, since 2019, he has begun work on Guadeloupean identity, aware of the importance of taking up this question which he considers urgent.